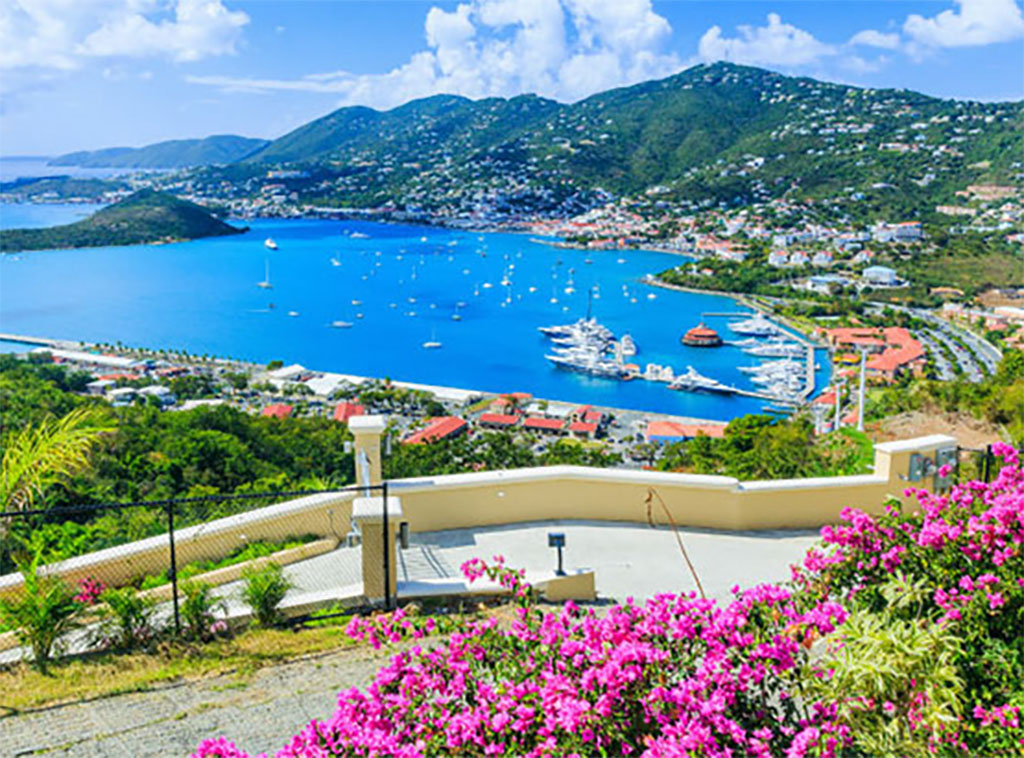 Thursday morning, I got an email from Royal Caribbean saying that they hope to be announcing a back to sailing date at some point next week. With that announcement it is expected that there is going to be a rush of guests booking cruises quickly. But, in light of what has been happening these past eight months, short cruises (seven days or less) to the Caribbean are expected to be the highest demand cruises. With that information, I decided that today’s newsletter is going to focus on the U.S. Virgin Islands. 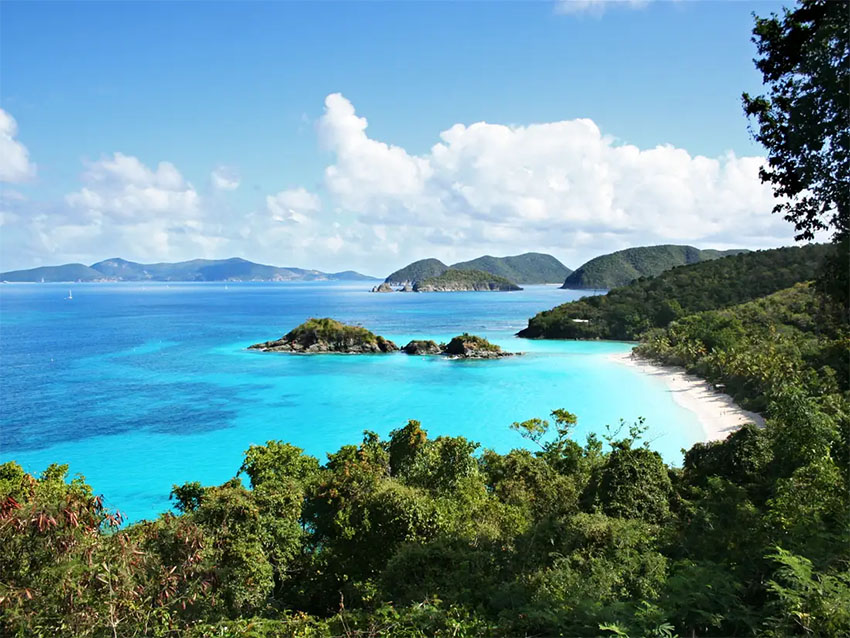 The Virgin Islands are an American territory. This means that if you are visiting any of the three islands (St. Thomas, St. Croix, or St. John) you will not need a passport. American English is the official language spoken and the U.S. Dollar is the primary currency. All three islands are in the Atlantic time zone but they do not observe daylight savings time (their time is the same as the U.S. East Coast during our Daylight Savings Time, but an hour ahead of us from November through the beginning of March).

Christopher Columbus discovered all three islands in 1493. Since then they had been ruled or owned by the Spanish, English, French, Knights of Malta, French (a second time), the Danish, and now the U.S.A. Because of the amount of time they were under Danish rule (251 years) there is a very strong Danish influence on the islands. This is obvious in the street names, town names, architecture, and former plantations.

Getting to the islands is pretty easy. You can jump on a plane from Orlando or Miami and be there in about two and a half hours. If you are flying from New York, add another hour to your trip. Once on the islands you can get a cab to take you around or you can rent a car and use your U.S. Drivers license. Be warned however that in the Virgin Islands you will have to drive on the left side of the road, not the right! If you want to island hop, there are ferries (20 to 30 minutes between St. Thomas and St. John and 2 ½ hours between St. John and St. Croix) or there are flights between St. Thomas and St. Croix which will take about 25 minutes. 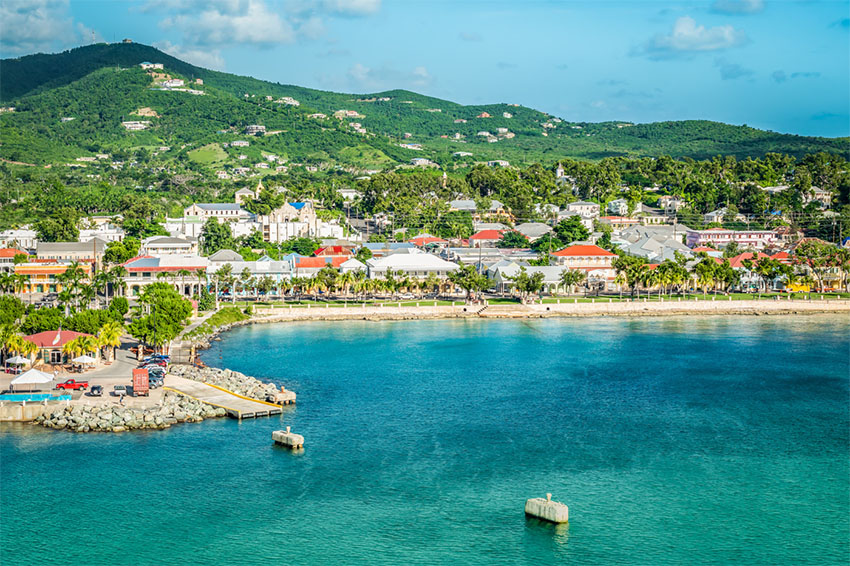 The largest of the three islands, St. Croix has gentle hills, historic towns, sandy beaches and is surrounded by the Caribbean Sea. It is 28 miles long and seven miles at its widest point. The island has the greatest cultural diversity, and boasts pastel buildings and small shops in the historic towns of Christiansted and Frederiksted. Main attractions include the 700-acre underwater Buck Island National Monument.

Buck Island National Monument is the area of the island that once had rocks and was impassable. It now has soft white sand thanks to the storms that passed through a few years ago. Other featured attractions on St. Croix include St. George Village Botanical Gardens; the authentic Danish Whim Plantation Museum dating from the 1700’s; Cruzan Rum Factory tour and the 18-hole, par-70 Carambola Golf Club. 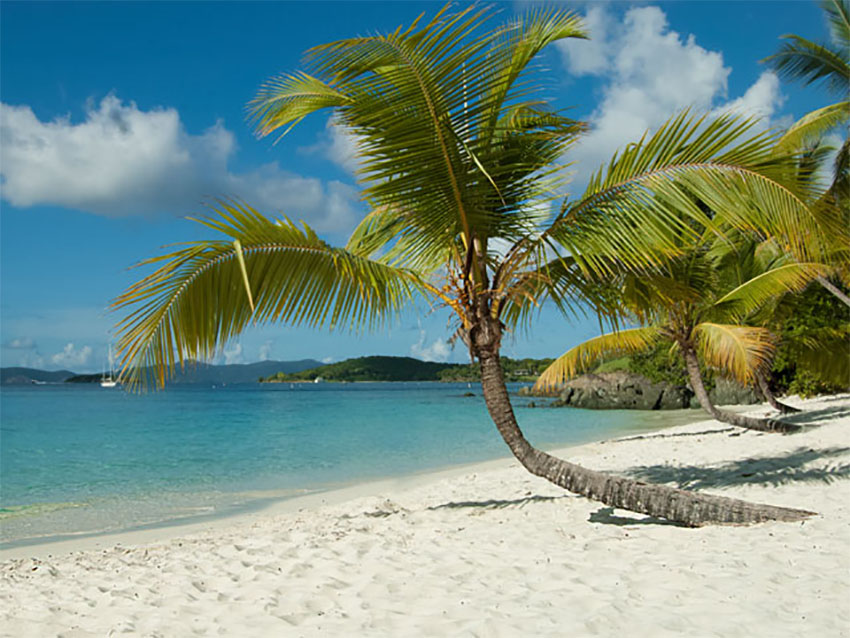 Two-thirds of St. John, the smallest of the three islands at 19 square miles, is the protected Virgin Islands National Park with 9,500 acres of rolling green hills and an underwater reserve. This tranquil world can be explored on more than 20 self-guided hiking trails or by snorkeling or diving its fish and coral-filled waters. The island also boasts some of the world’s most beautiful beaches including Trunk Bay and Cinnamon Bay. The main towns are Cruz Bay with shops and restaurants, and quaint Coral Bay.

Mountainous St. Thomas combines natural beauty with a cosmopolitan atmosphere. A major cruise port as well as the capital city, scenic Charlotte Amalie features top dining and duty-free shopping as well as historic monuments. The island boasts magnificent views of the Caribbean from 1,500 feet above sea level, with Drake’s Seat and Valdemar Hill two of the most scenic overlooks. Paradise Point Tramway lifts visitors 700 feet above sea level on a cable car to one of the most spectacular views of Charlotte Amalie Harbor. Well-known Magens Bay is just one of more than 40 pristine white beaches on the island. Other top attractions include Coral World Ocean Park & Observatory and Fort Christian built in 1672.

One question I get from guests visiting these islands is what kind of condition they are in after all the hurricanes that went through several years ago. I recently took a course on The Virgin Islands and they made a point of talking about how the islands have recovered and with the exception of a very few things (a few campgrounds, Caneel Bay, and a few smaller end hotels) the islands are open for business again as they were before all the storms came through.

The Virgin Islands have three major festivals each year. St. Thomas is host to a month-long celebration of Carnival (called Virgin Islands Carnival) that includes pageants, parades and music and food festivals. The last week of April is when both the Children’s and Adult’s parades are held.

There is no right or wrong way to see the Virgin Islands and with temperatures ranging from 77 degrees (winter) to 82 degrees (summer), there is no wrong time to go either. You can visit on a cruise, where you will most likely visit only one or two islands. You can also have me create an itinerary for you where you can fly down and get to spend some time on each island over a span of 5 or more days. If you are going for less than 5 days, I wouldn’t recommend trying to get all the islands in on one trip. And if you want to go down with a bunch of friends, consider doing a group trip and having an itinerary that includes golfing, diving, or even a yacht cruise as part of your group events!

With these islands only being a couple of hours away and no more hassle than flying to another state, The Virgin Islands are a great option for a short (or long) getaway or a cruise port on your next cruise itinerary!