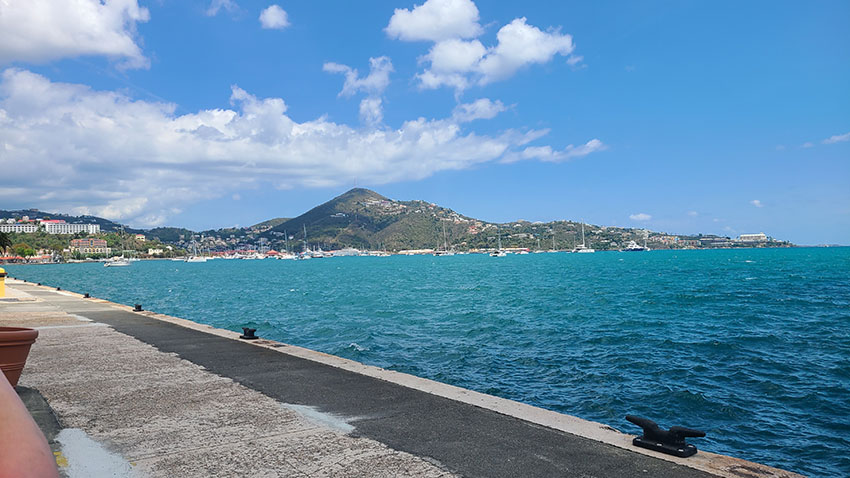 Last week Diane and I had our 21st wedding anniversary. Our river cruise last year was canceled due to Covid and we had to stay home, I wasn’t ready to have to do that two years in a row. As cruises aren’t running yet, I planned a short land stay in St. Thomas in the U.S. Virgin Islands. 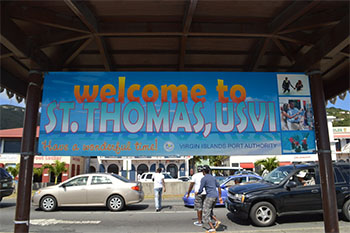 Today’s post will give you an overview of our trip and what we experienced.

The first item of business was that we needed a negative Covid test before flying to the island. We did this through a drive-through at Walgreens on Wednesday afternoon. The requirement is that you have a negative test within 72 hours of travel. No test was required to come back, just to go there.

Also, even though St. Thomas is a United States territory, it is still treated as international travel. To come home you go through U.S. Customs on the island and have either a passport or a government ID & birth certificate with a raised seal. Other forms of ID are acceptable but check with me before you go to make sure that what you have will get you back into the U.S. 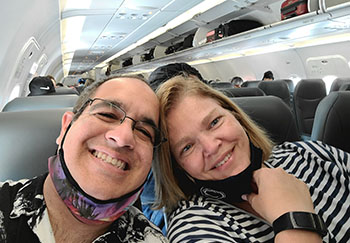 Friday came and our flight was scheduled to leave Orlando at 12:30 pm and arrive at St. Thomas at 3:30 pm. After we boarded the plane, we sat for about 30 minutes until the pilot got on the radio and said the AC unit wasn’t working. We needed to get off the plane as it would take about an hour to fix. An hour later we were back on the plane and on our way to St. Thomas. The new arrival time was 4:30 pm.

Once we landed, we had to show proof of the negative vaccine. Then we went and found a taxi that would take us to our hotel “Flamboyan on the Bay”. The ride was about 30 minutes and we had to drop off another couple on the way. It was during the first 30 seconds of the ride that we were happy we didn’t get a rental car for the weekend.

If you are not comfortable driving on the wrong side of the road or do not like really narrow streets, then driving here is not for you. When I say narrow streets, I am talking about driving down a one-way street with cars parked on both sides and not even enough room for a strand of hair between your car and the cars parked alongside the road. Gas was about $2.75 to $2.85 in Florida when we left, the prices in St. Thomas were between $3.50 and $3.65. 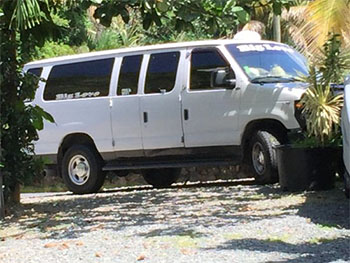 Taxis are all over St. Thomas. Rates are set by the Virgin Island Taxicab Division. This means that it doesn’t matter which taxi you go in, you are going to get the same rate. Just make sure you are getting into a taxi and not just someone’s car. Most Taxis are mini-vans and they will have a TAXI sign on their car. There is no Uber or Lyft on the islands.

St. Thomas has a lot of hills; it is a volcano after all. And it goes from water level to 1,550 feet on an island that is only about 3 miles wide. You can see how that isn’t a gradual incline. You don’t want to walk across the island if you can avoid it. 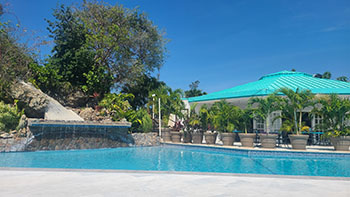 Our stay at the Flamboyan was nice. We had a one-bedroom suite that has a view of Magens Bay. It was a little obstructed by trees but it was still nice to sit out on the balcony and see most of the Bay.

That night we went to have dinner at the restaurant that was attached to the resort, it was called the RooT 42 Restaurant and Bar. RooT Stands for “Raised out of Tragedy” as it received its name after the hurricanes that came through several years ago and the previous restaurant was destroyed.

The restaurant was poolside and seating was outdoors. Because there are not a lot of restaurants in the area we were (central/north island) everyone staying in a hotel or BnB locally came up to RooT 42 to eat. If you got to the restaurant after 6 pm, the wait was between 45 minutes to an hour. When we went there for lunch, there were two other couples there the entire time. 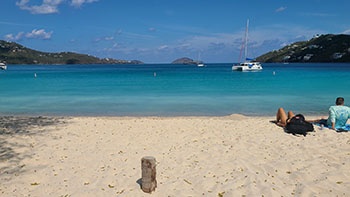 The next day we decided we were going to Magens Bay. We were told it was only about a 15-minute walk from the hotel but we would want a taxi to bring us back. Being it was only 15 minutes we decided to walk it and discovered that it was a 15-minute walk almost straight down a hill. I don’t think either of us would have made it back on foot (see below when I talk about dinner on Sunday night).

At Magens Bay we got some Pina Colada’s and then went snorkeling for a while. The water was beautiful but it was not very good for snorkeling. We saw about 5 pools of fish that were smaller than goldfish.

After playing in the water and tanning on the beach, we made our way to a taxi and returned to the hotel. Once at the hotel, we decided to explore a little bit. 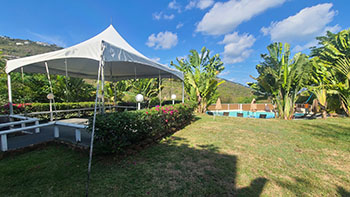 We went down to the second pool that the hotel had and it was open with no one there. Behind the pool was an area that would be nice for a wedding or party.

After leaving the pool area we found an open gate with some landscapers inside trimming hedges. We went inside but I am not sure it was open to the public. There was another building inside that looked to be hotel rooms. The doors were smashed in, the windows boarded over, debris all inside the rooms. It occurred to us that the hotel hadn’t fully recovered yet from the hurricanes that came through in 2018. There was a sign saying the spa was this way along with some other things which had not yet reopened. The building we were in and maybe one other seemed to be the only buildings that were restored at this point. 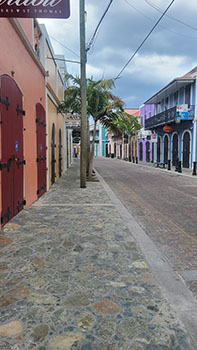 The next day (Sunday) we made our way downtown. This trip is where it sunk in how much of the island was still suffering from the hurricanes and now Covid. On the drive downtown, we could see all the buildings that were either hollowed out or knocked down. When we got out of the cab to walk around in the shopping district, only a handful of stores were open.

We went into one of the clothing stores and were talking to the lady who runs it. She was telling us how when the cruise ships were sailing, they would bring about 3,000 people to the island on each ship every day. When you figure there are probably three or four ships in port each day, that is around 10,000 to 12,000 people a day who were shopping. Now she sees only a handful of people come into her store each day. Some stores are open on Sundays but most are not right now.

While we were downtown, we did go to Sunday Mass at Saints Peter and Paul Cathedral. It was a beautiful little cathedral that could hold maybe 200 people. At the end of mass, they asked who was visiting, Diane and I were the only two who held up our hands. When we are traveling, we always try to go to church at the destinations we are in, and someplace like St. Thomas should have a lot more people raising their hands showing that they are visiting. This was just another sign of how difficult things are for the travel and tourist industry because of Covid right now. 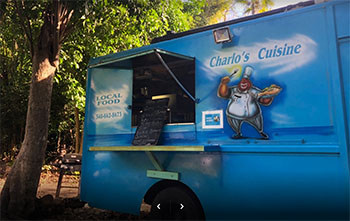 After spending a day downtown we returned to our hotel. It was dinner time and I had read about a food truck that was supposed to have the best food on the island, and it was only .2 miles from our hotel. Downtown was relatively flat but I know it was a long day for us anyway so I told Diane to stay in the room and I would walk down and get us dinner. What a mistake that was.

The food truck was halfway between our room and Magens Bay Beach. Remember what I said about the walk being almost straight down to get to Magens Bay? I made it to the food truck with no problem and ordered some ribs. Then I started back and had to stop two times. I wasn’t sure I was going to make the hike back. I could almost see the hotel room from the food truck it was that close, but the hike was killing me. And to make matters worse, there was a local (had to be) woman who was getting her daily run in. She was running up the hill, not down. So I felt really out of shape as I crawled through the door to our room.

The food from Charlo’s Cuisine was delicious. If we had more time and they weren’t .2 miles below us, I would have probably figured out a way to try some of their other meals as well.

On Monday we packed up our bags and checked out. We had lunch by the pool before heading back to the airport. Today’s taxi ride to the airport took us through the downtown area we were in the day before. I would say two out of every three businesses had their doors open. This gave me a little faith that their economy would survive Covid.

They tell you to get to the airport in St. Thomas about three hours before your flight. Our flight was at 4:20 pm so we got there a little after 1 pm. We went through customs and made it to the terminal in about an hour. There were some issues a few weeks ago with the TSA checkpoint and they had to close down some of the lines, I believe that is why they are telling people three hours now. Hopefully, they will get that resolved soon.

Overall, we had a wonderful time in St. Thomas. Our goal was to relax and we did have plenty of relaxation. The weather was beautiful every day with it being in the low 70’s in the morning and high 70’s/low 80’s in the afternoon. You want to bring sunblock with you, even though it may not be hot, the sun is strong with its rays.

I did almost forget to mention this, St. Thomas is about where Florida was last May. There are no mass gatherings, no movies, no clubs open. Open bars are at a limited capacity, can’t sell alcohol after 11 pm, and have to be closed by midnight. You also have to wear masks everywhere.

I hope you found this week’s Navigator informative and if you have any questions on St. Thomas send them my way. If you want to visit St. Thomas, St. Croix, or St. John; let me know and I’ll take care of all your arrangements for you!