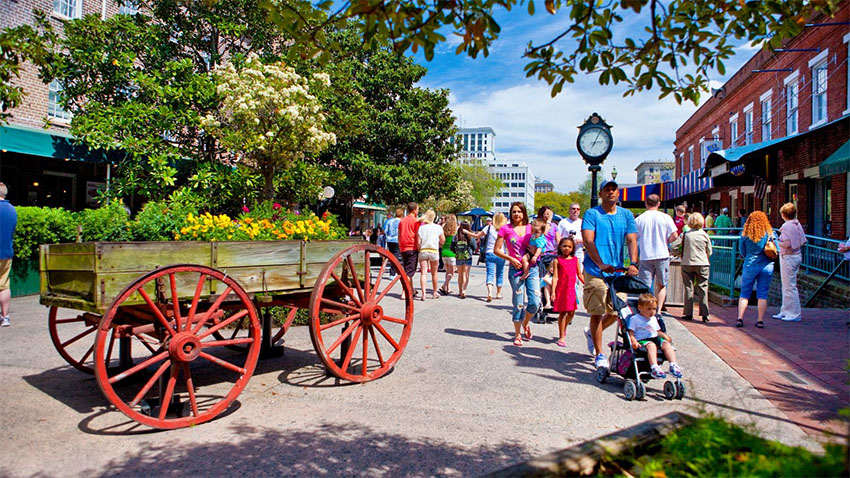 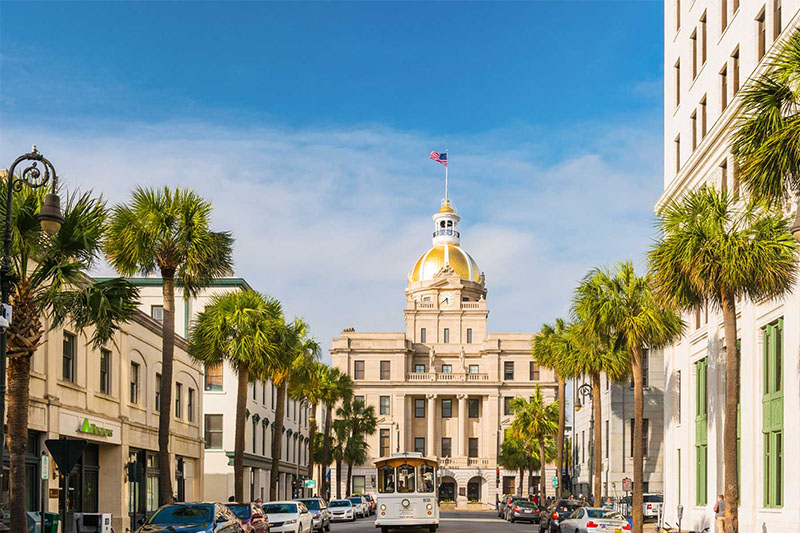 Today, I have Georgia on my mind; specifically, the lovely city of Savannah. This gracious city is known for its stately architecture, grand oaks, Spanish moss, and welcoming nature.

Founded in 1733 by General James Oglethorpe whose statue stands today in Chippewa Square, the colony was named after King George II of England. The early colony flourished in part due to a friendship between General Oglethorpe and the local Yamacraw Indian Chief Tomochichi.

Savannah is rich in the complicated history of America with echoes of the Civil War, early African American history, and antebellum life. Originally a free colony, early farmers found the soil fertile for cotton and rice. As a result, Georgia legalized slavery and brought many slaves through the port of Savannah. The cotton gin was invented here and the Savannah Cotton Exchange set the standard for the world’s cotton prices. It was during this time of prosperity that many beautiful homes in the city were constructed. 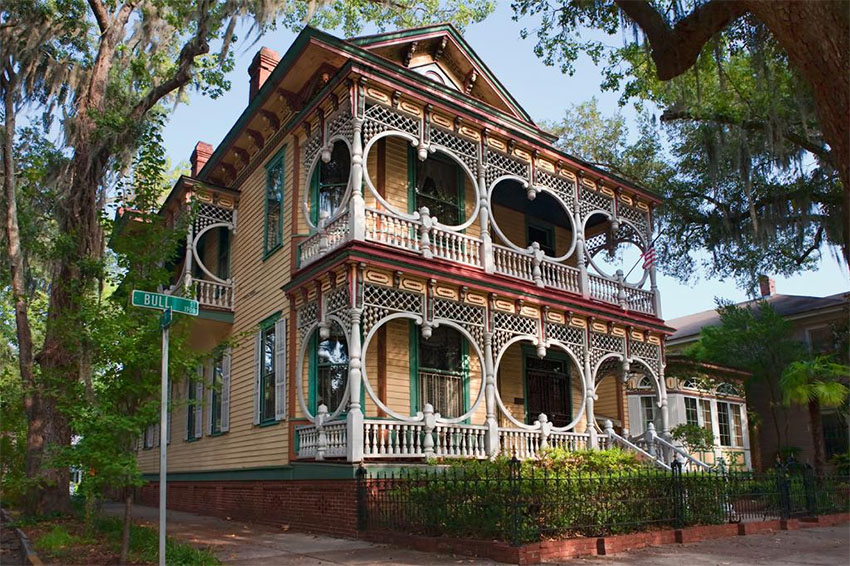 After the Civil War, the freed former slaves created a new community and Savannah became one of the most historically significant African-American cities in the nation. Completed in 1859, the First African Baptist Church is the oldest black congregation in America.

If you only have one day in Savannah, you should visit the Historic District. Oglethorpe carefully planned the design of the city with wide streets and shady squares and parks – many of which still exist today. Here you can experience the beauty of the architecture, with ornate wrought iron and stately columns along with several notable historic sites. 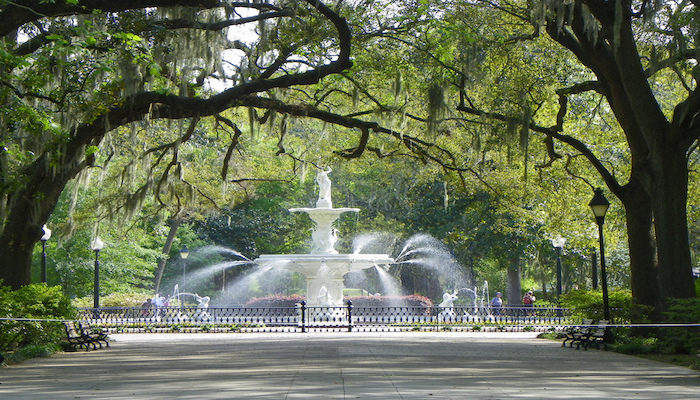 A cornerstone of the Historic District and must-see is the Forsyth Park. This large park is perfect for a stroll, has two children’s play areas for smaller and bigger kids, and even a fragrant garden designed for the blind. The centerpiece of the park is a stunning fountain modeled after those at the Place de la Concorde in Paris. Bring your coffee or a picnic and relax and enjoy. The park hosts community events and festivals throughout the year, so check the city calendar before your trip. Saturday mornings you can enjoy the Farmer’s Market.

The Cathedral Basilica of St. John the Baptist

Towering in the center of the historic district are the majestic spires of the Cathedral Basilica of St. John the Baptist. The church was established by French Catholic refugees in 1799 fleeing slave rebellions in Haiti and became the main church for free blacks in the early 19th century.

The original building was destroyed by fire in 1898 but was rebuilt in 1900. Full redecoration of the ornate interior detailing took another 14 years.

You can view the awe-inspiring interior of the Basilica on a self-guided or docent-led tour (with appointment). One note, this is an active house of worship and is not available during masses or religious ceremonies. 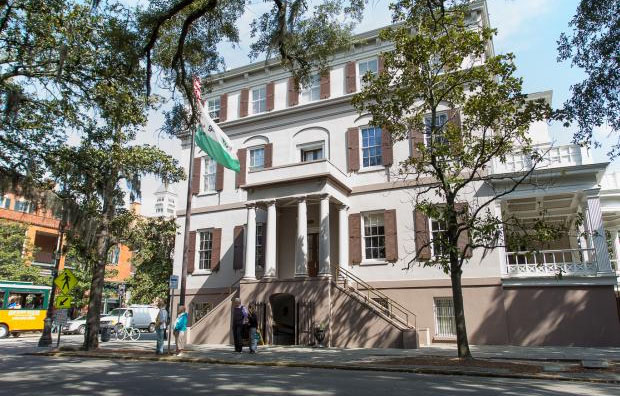 Former and current Girl Scouts will enjoy visiting the birthplace of Juliette Gordon Low, the organization’s founder. The district consists of The Wayne-Gordon House, where Low was born, the first Girl Scout Headquarters, and the Andrew Low house. Her birthplace was the city’s first National Historic Landmark.

Another stop for history buffs is America’s only prohibition history museum. Travel back to the Roaring 20s to the time of the Temperance Movement, the 18th Amendment, rum runners, gangsters, speakeasies, and more. You can enjoy an authentic prohibition-style cocktail at the Congress Street Up speakeasy. 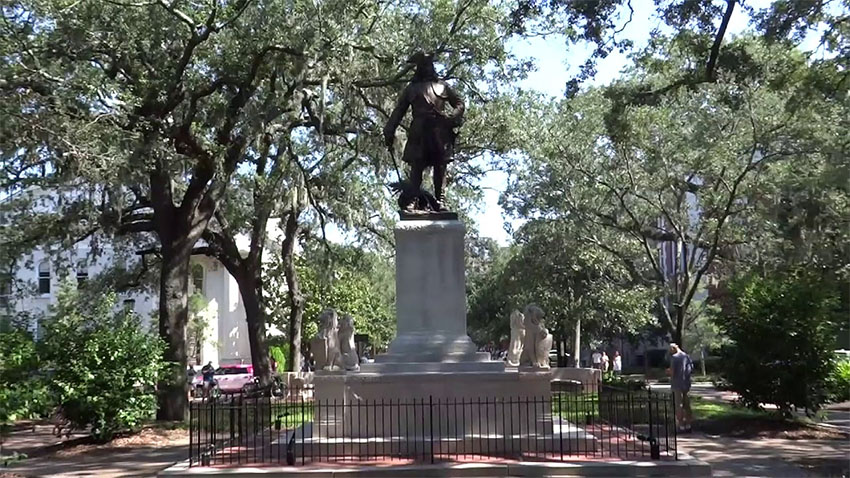 Chippewa Square is one of the lovely examples of the many beautiful garden squares of the city. This iconic location, with a statue of General Oglethorpe, is the location of the box-of-chocolates bench scene from the movie Forrest Gump. You won’t be able to sit on Forrest’s bench, however, it is now located in the Savannah History Museum.

The Historic District is very walkable. It is designed on a grid, so it is easy to navigate. Every few blocks there is a lovely square with benches and fountains for a rest. The area is dotted with coffee shops, cafés, and other shops to browse in as you go along.

Old Town Trolley Tours of Savannah makes it easy to see all of the historic sites with their hop-on-hop-off tours. For the full southern experience, you can book a horse-drawn tour with Savannah Carriage. 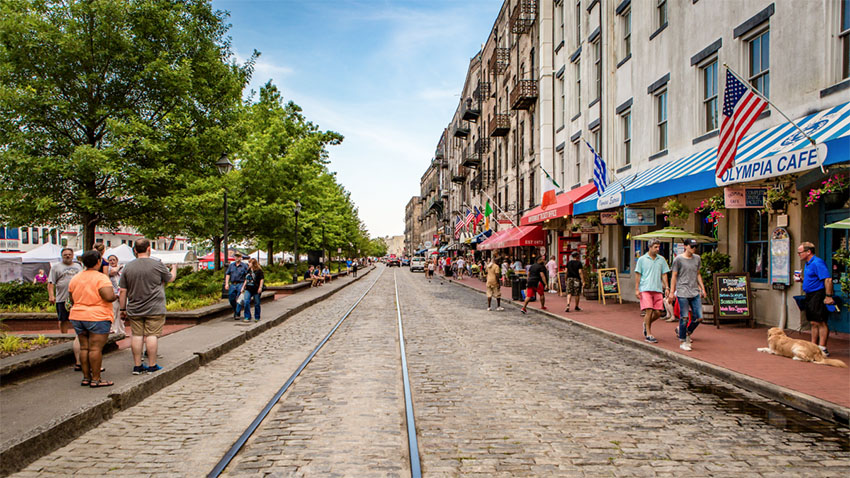 At the other end of the Historic District is River Street. Here you can see the original Cotton Exchange building. This is a picturesque avenue with statues, historic buildings, and the smells of the many restaurants are sure to get your stomach rumbling. Wander through shops and have a delightful lunch overlooking the river. The trade barges go up and down the river and you can watch them while you dine. End your day with a sunset cruise on the Georgia Queen, one of the Savannah Riverboat Cruises paddleboat. 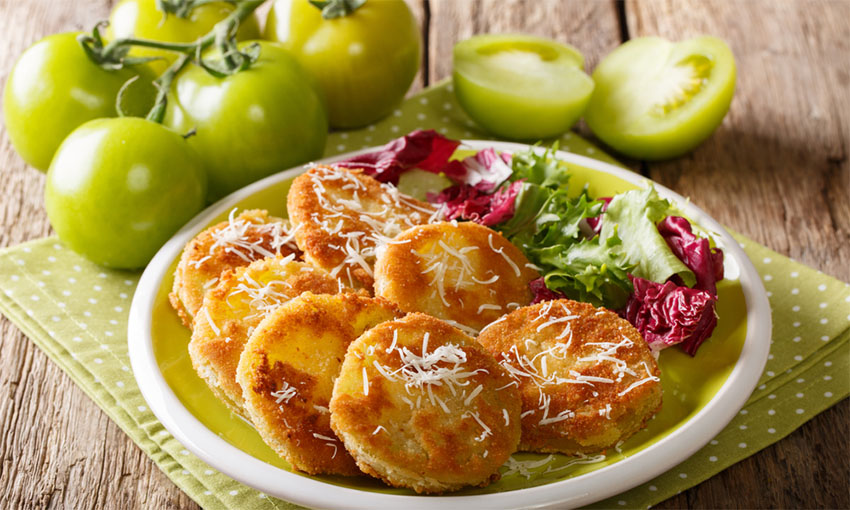 Savannah is a place to treat your tastebuds as well. From fresh seafood to crispy fried chicken there is much to savor. Get an order of fried green tomatoes on the side, or shrimp and grits – a staple on any Southern table. For dessert, well you won’t go wrong with Georgia peaches and pralines.

I hope you enjoy the sights and flavors and most of all, the southern hospitality of Savannah.