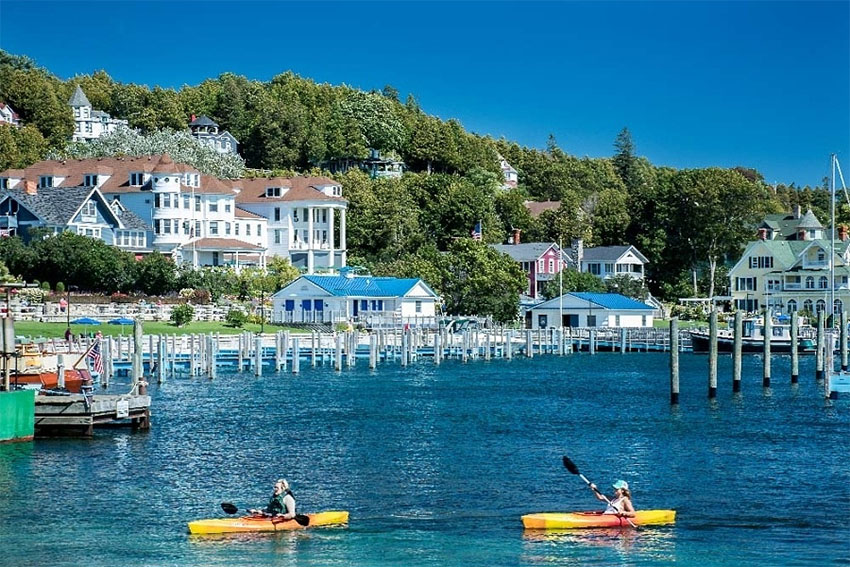 Take one look at Mackinac Island’s picturesque trails and gorgeous shoreline views, and it will be clear why travelers call it the jewel of the Great Lakes. 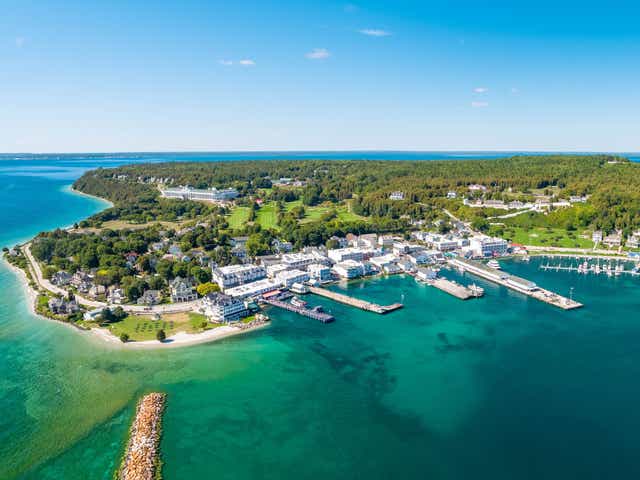 Located on Lake Huron between Michigan’s upper and lower peninsulas, the island is less than 5 square miles in area; however, this is more than enough for the island’s approximately 1 million annual visitors. As a National Historic Landmark, Mackinac Island enjoys a thriving tourist season each summer, with people coming from all over the country to enjoy a lakeside getaway surrounded by beautiful late-1800s architecture and rolling fields.

The island is inaccessible by car; in fact, motorized vehicles of any kind are not permitted on the island. In the summer, visitors must either take a private boat, a small airplane, or a 45-minute ferry from nearby Mackinaw City or St Ignace. In the winter, an ice bridge is used as a snowmobile path to take residents back and forth from the island, but tourists tend not to visit as much during the winter as it gets very cold and the island can be difficult to access depending on the weather. 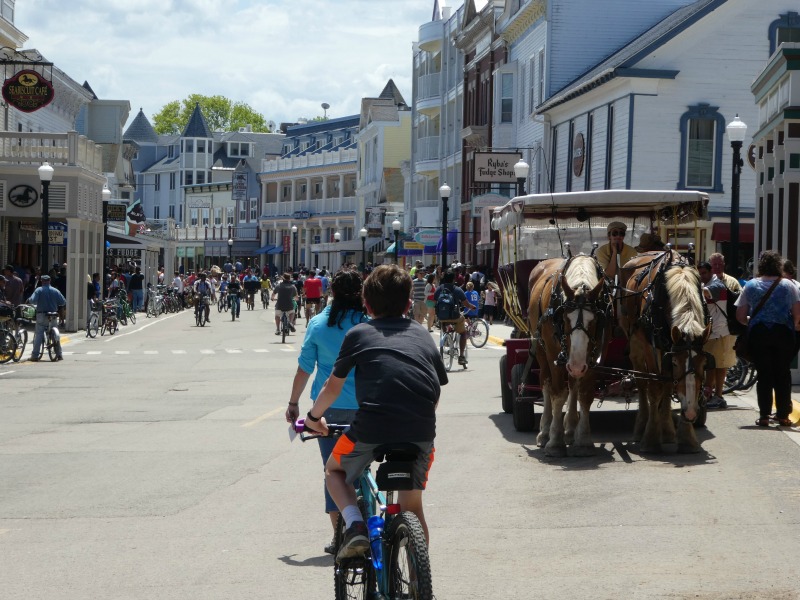 Once on the island, people are permitted to travel by bicycle, skateboard, rollerblades, or horse-drawn carriage, making it a great destination for those looking to get a little outdoor exercise. Bikes can be rented on the island for hourly, half-day, or full-day rates. Typically, hourly fees are about $7-$9 for adults, depending on where one rents from, but for a small fee, visitors can also bring their own bikes with them on the ferry. It is important to note that speeding tickets can be issued for cyclists, as they are the fastest-moving vehicles on the road, so visitors should be aware of the posted speed limits at all times.

Those interested in more intensive exercise can make a day of exploring the 70.5 miles of trails that make up Mackinac Island State Park, either through self-guided exploration or by following one of seven themed tours laid out in the Historic Mackinac Island Visitor’s Guide. The trail system is so varied that at any point along the path, one may stumble upon sights such as a well-tended peace garden, a historic monument to Governor Lewis Cass, a stunning natural rock formation known as Skull Cave, or a serene pebble beach where one can wade in the Straits. 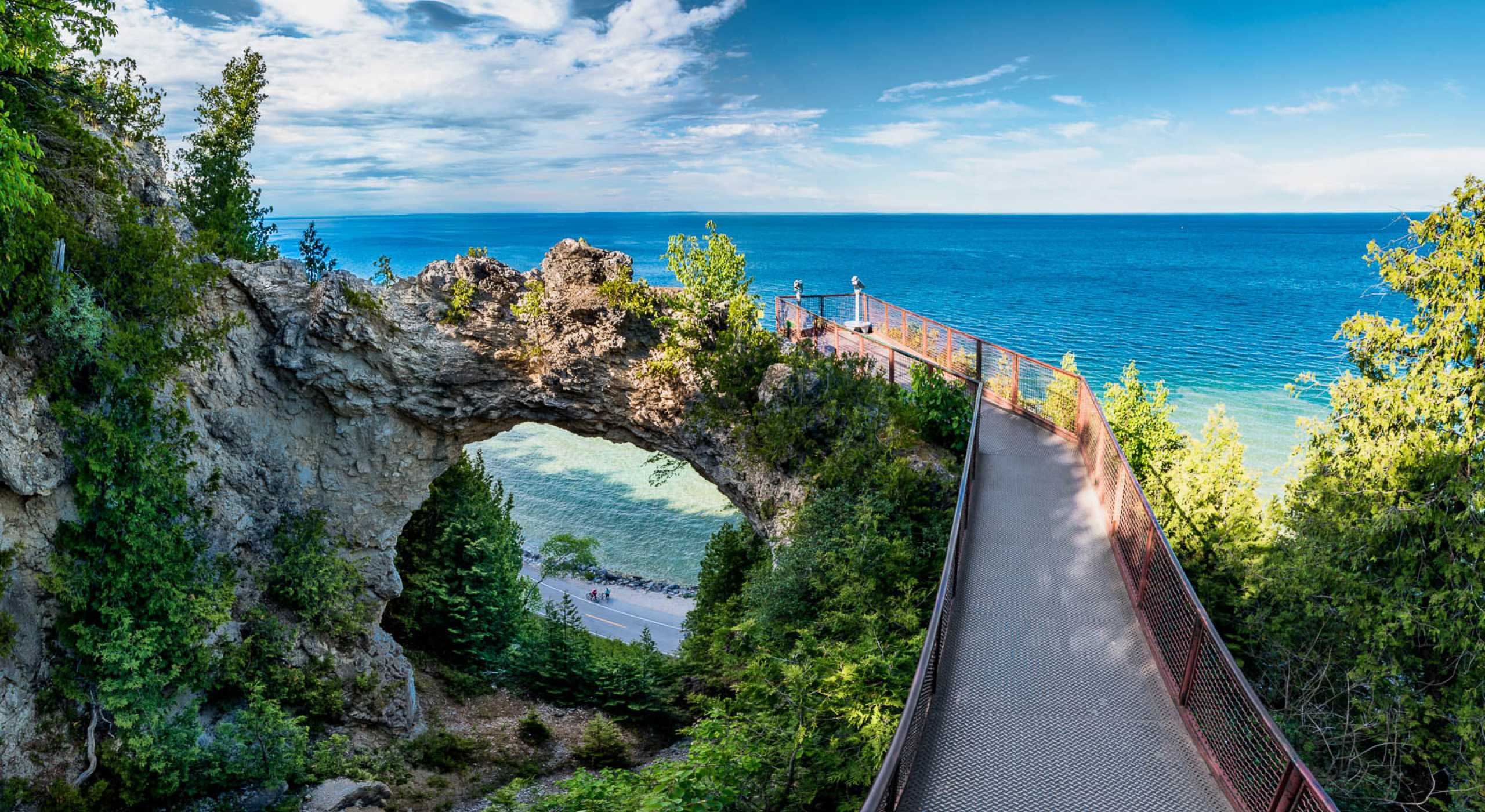 Nature enthusiasts will find a wealth of information pertaining to the island’s varying geology, flora, and fauna in the British Landing Nature Center, which is open to visitors throughout the summer. Mackinac Island is particularly well-known for its lilacs, which bloom throughout the spring and summer, dousing the island in their sweet, light fragrance.

History buffs will find lots to learn about around the island, such as Fort Holmes, the Michigan Governor’s Summer Residence, the Scout Barracks (interiors not available to the public), and the 1814 Battlefield and British Landing, the latter of which still hosts a historic cannon from when the Americans attempted to recapture Mackinac Island from the British in the War of 1812.

Visitors to the island tend to book accommodations at the town’s various well-known, lakefront hotels such as the Hotel Iroquois, the Grand Hotel, or the Mackinac House. There are also a number of smaller inns and Bed & Breakfasts on the island, such as the Metivier Inn, a Victorian B&B with beautiful French gardens. It is worthwhile to note that, due to its small size, accommodation on the island tends to be more upscale and expensive, and those traveling with children or simply looking for a more budget-friendly option may opt to instead stay at a hotel on the mainland, such as in Mackinaw City or St. Ignace, and take the ferry to the island during the day.

Shopping on the island is mostly limited to touristy souvenir shops, but a few higher-end clothing and jewelry stores can be found as well. Restaurants, on the other hand, are plentiful and widely-varying in price point. The available cuisine is mostly traditional American food, and the ambiance ranges from casual diners to breezy outdoor cafes to fancy sit-down restaurants. 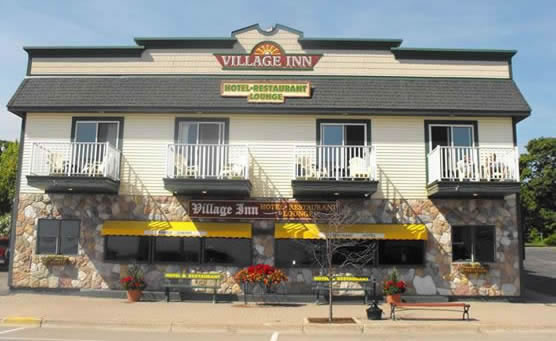 One well-reviewed dinner option is the Village Inn, where visitors rave about its specialty whitefish dinner. For a casual dessert, locals may recommend stopping in at Murdick’s Main Fudge Shop, whose founder, Rome Murdick, is credited as being the first person on Mackinac to make fudge on marble slabs, a method which provides a unique flavor profile to the candy while also making its presentation all the more beautiful.

While life on the island is charming and laidback at all times, making it a peaceful retreat for any family, the real draw is the various events and festivals that take place throughout the summer. When visiting the island in early June, one will be excited to see the annual Lilac Festival, the first and largest of the Island’s summer events each year. The festival attracts thousands of visitors each year to partake in horse-drawn carriage tours through lilac-lined streets, cheer on the Lilac Festival Grand Parade, and watch the coronation of the annual Lilac Festival Queen and Court. 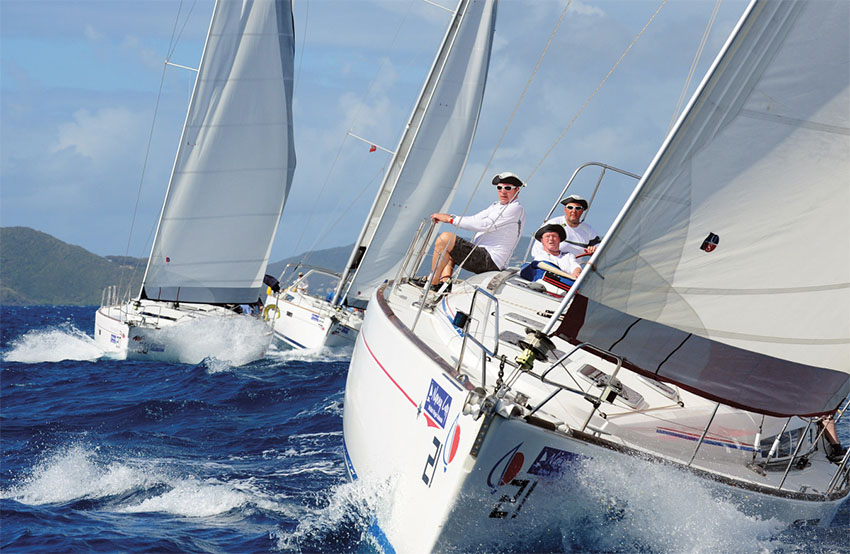 As the summer season gets into full swing, additional celebrations are held such as the annual Fourth of July fireworks, the Chicago Yacht Club race to Mackinac in mid-July, and, later in August, the Mackinac Island Fudge Festival. Each year, the summer season ends on the last weekend of October with the Halloween celebration, which consists of trick-or-treating events for kids, Halloween costume parties for the adults, and the Great Turtle Trail Run, which includes a 3500-participant Half Marathon course winding along the shoreline and up through the interior bike trails.

At the end of the day, no matter what one is looking for in a summer vacation, Mackinac Island is sure to please. With plenty of outdoor activities, places to eat, and relaxing ways to enjoy nature, Mackinac truly earns its title as the jewel of the Great Lakes.