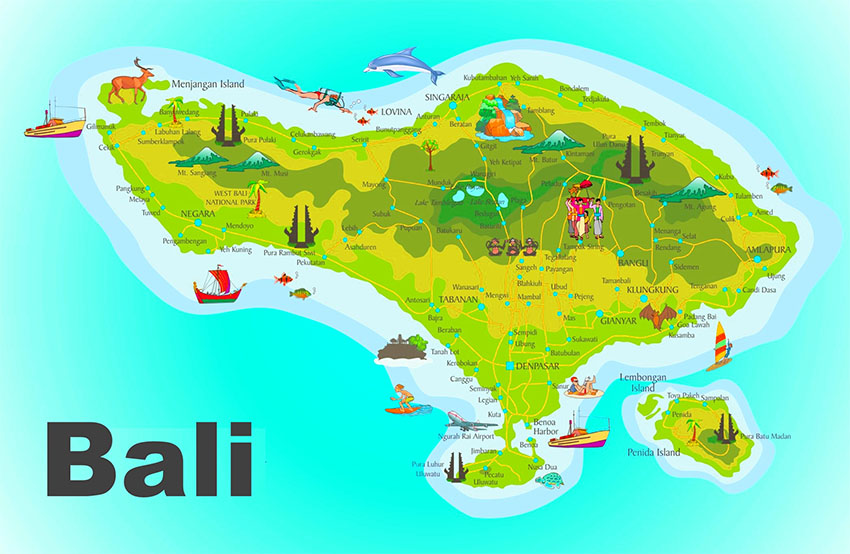 For anyone who has been following the TDJ Travel page on Facebook or Instagram, you will have noticed that this month I am featuring Bali, Indonesia in my morning posts. I have always seen Bali as a magical place and wanted to talk a little about it today.

I’m going to start today talking about what there is to do in Bali – and it’s a lot!

Bali is an island and therefore has beaches on every side of it. Each beach has its own characteristics and personality.

Beaches in the South 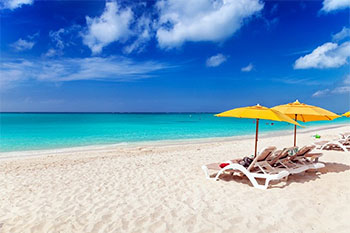 You will find some of the best beaches on the island for that “Tropical Feeling”. These beaches in the South have beautiful white sand, great surfing waves, and are ideal for just lounging around on the beach and catching some sun. If you want to go swimming here, be aware that at times the tides can be strong. If you head south from the airport you will find Jimbaran Bay where there are gorgeous resorts and many seafood restaurants.

Because of its volcanos, as you go further north you will start to see the beaches go from white sand to dark brown sand. There are not a lot of beaches on the Northern side of the island and most people who go to these beaches are going there for dolphin watching or boat trips. The exception is Pemuteran on the North-Eastern side of the island. Pemuteran has white sand beaches and is a great place to go snorkeling and diving. 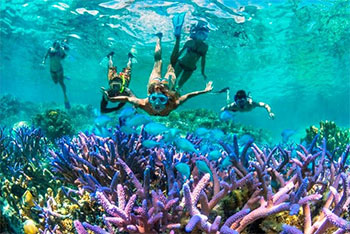 The east side of the island has great beaches for swimming and snorkeling/diving. Sanur is the most famous destination on this side of the island and has a beautiful coastline. There are also hidden beaches that are worth going to. One beach is Bloo Lagoon. To get to Bloo Lagoon you need to walk down steep stairs, go through several beach bars, and walk through local housing areas. But once you get there you will find crystal blue water and colorful reefs on the bottom of the sea.

The west coast is mostly black sand beaches. These have fewer visitors which is ideal if you just want to be alone and enjoy the water. Many have good access roads but there are some beaches here which only have small ATV size access, which makes them good if you want to go ATV’ing on the beach.

If you are going to Bali, you going to want to go sightseeing and not just spend all your time on the beach. There is so much to do on this island. 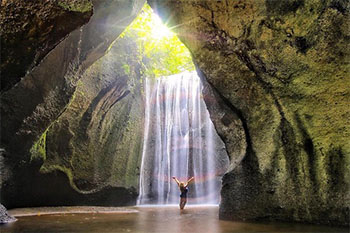 The waterfalls are located within the rain forest. For most of them, you will need to trek through tropical plants and more often than not, have long staircases to climb. If you aren’t in decent shape, you may find it hard to reach some of these but if you can make it, they are worth the effort. 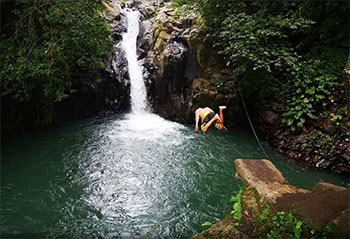 Three waterfalls are a must-see. Tukad Cepung Waterfall is located inside a cave. Aling Aling Waterfall is one of the few places around the world where you can go cliff diving through the falls and into the pond below. And then there is Tibumana Waterfall because the water falls straight down without hitting any rocks, so it is very smooth and even more important is because it is the easiest to get to. There are only about 100 steps to go down to get to this one!

There is a nominal entrance fee to see the waterfalls. 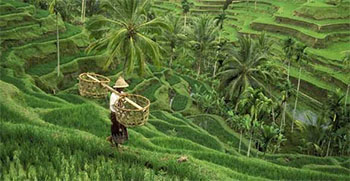 After visiting the waterfalls, there are several rice terraces & fields to visit. At first, I thought to myself “what is so special about a rice field?” These aren’t just wide open fields like you would find here in the U.S. The local villagers in Bali carve out the land to make these rice fields. There is one called “Jatiluwih Rice Terrace” that is a Unesco World Heritage site. They use an irrigation system from the 9th century that uses water from various rivers and streams to irrigate the fields. It’s not simply providing water for the plant’s roots, but water is used to construct a complex, pulsed artificial ecosystem.

Many of the rice terraces and fields are in villages that have more than just the fields. Waterfalls, museums, temples & religious sites can often be found in or near the villages as well.

There are several larger villages on the island and I won’t go into each one of them because I can talk for hours on them, but I will mention a few of them. 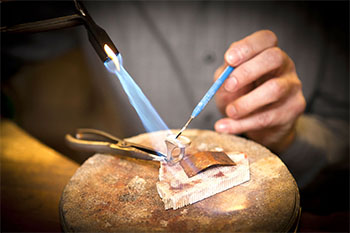 Celuk Village – This village is popular for its metalworking, more specifically its silver and gold handicrafts. Many of the jewelry shops in the villages have areas outside where visitors can stop in and watch as they shape their precious metals into jewelry or other metal designs.

Penglipuran Village – Penglipuran is the best well-preserved traditional village in Bali. Each family who lives here has to leave at least one original building standing so that tourists can see how things were a long time ago.

Nyambu Village – If you are into eco-tourism you won’t want to bypass this village. About 50% of the village is comprised of rice fields. It’s not far from the city but it has not been touched by modernization. There are 67 traditional temples here. You can also take tours of their agricultural history, religious history, or local history. 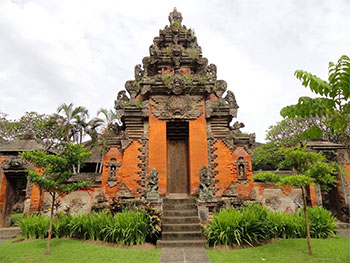 Just like villages, there are plenty of museums, temples, and religious sites that you can visit on the island.

The museums on Bali cover everything from its oldest history to modern art.

Bali Museum – You can find artifacts in this museum dating back to the Mesolithic Age to recent works. There are paintings, statues with inscriptions, musical instruments, and even weapons used in the Bronze Era. 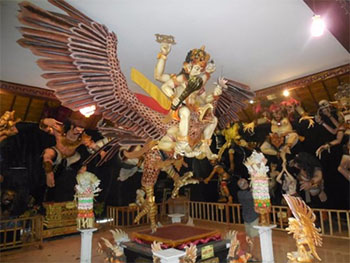 Ogoh Ogoh Museum Mengwi – This museum is dedicated to the preservation of the Ogoh-Ogoh tradition. This tradition is the creation of demonic statues made of bamboo and other materials to be used in the Ngrupuk parage. It would be similar to a museum here in the United States that was dedicated to the balloons used in the Macy’s Day Parade.

Batur Geopark Museum – If you want to learn about the island of Bali, this is the place to go. This museum is dedicated to geological, biological, and cultural diversity. They have exhibits that showcase the formation process of Bali from more than 23 million years ago, the most recent major eruptions about 30,000 years ago, and how the volcanic activity on the island continues to shape the island today. 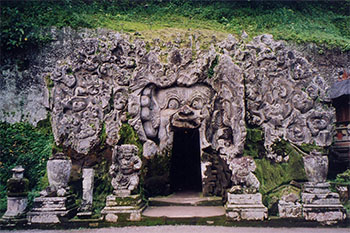 Goa Lawah / Bat Cave Temple – This temple is very important in the Balinese Hindu community. It serves the community as a guardian against dark spirits from the ocean. It has its name for a good reason, the temple complex is built around the entrance to a cave that is home to a lot of bats!

Pura Besakih – Besakih is known as the Mother Temple of Bali. It is considered the most important temple but is more complex than a single temple. There are over 80 individual temples in the complex.

A stone within Pura Batu Madeg suggests that the area around Pura Besakih was already regarded as sacred and holy since very ancient times. In Bali, many temples and their meaning cannot be separated from the land they are built on, the nature and the spirits and gods they believe do actually live there.

The priests let us know that during the 8th century, a Hindu monk had revelations to build homes on this holy ground. They say during the process, apparently many of his followers died due to illness and even accidents. Stories like this are the cornerstones of legends so it is difficult to get the historic truth. The people called the area “Basuki”. A name referring to “Naga Besukian”, a dragon deity inhabiting Mount Agung.

Many of the temples on Bali have similar legends to this one. 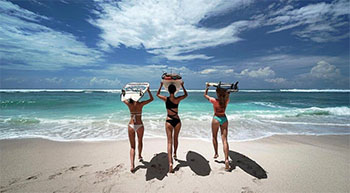 When is the best time to visit Bali? I would suggest April, May, June, and September. This is considered off-season and you can find savings of between 30% to 50% on villas compared to the peak season.

This was just a taste of Bali, there is so much more to talk about. If this is somewhere you are interested in going, let’s sit down and I can give you more information and help you plan your trip!